A memorandum for academic cooperation and exchange and a student exchange agreement between Kyoto University and Banaras Hindu University (BHU) were concluded on August 7, 2015. The signing ceremony for the two agreements was held on the BHU campus in Varanasi, India. Executive vice-president for gender equality, international affairs, and public relations attended the ceremony on behalf of Kyoto University, bringing copies of the agreements pre-signed by President Juichi Yamagiwa. The documents were then signed on behalf of BHU by its vice-chancellor, Prof. Girish Chandra Tripathi.

Also in attendance at the ceremony were delegates from Japan’s Ministry of Education, Culture, Sports, Science and Technology (MEXT), including state minister, Mr. Motoyuki Fujii, as well as delegates from the Embassy of Japan in India and other organizations. 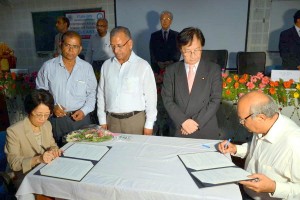 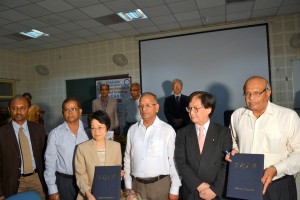