The 4th Kyoto-Bordeaux International Symposium was held online on February 18–19, 2021. The symposium was held as an initiative under the Strategic Partnership Agreement that was concluded between the two institutions in October 2019. The Strategic Partnership Agreement aims to build on the close academic ties that had previously been cultivated by the two institutions, and facilitate the development of interdisciplinary research collaboration and the promotion of human resource mobility in a diverse range of academic fields.

The 4th Kyoto-Bordeaux International Symposium sought to explore the potential of human capital development collaboration between France, Japan, and Africa in the three areas of energy science, medicine, and African area studies. The two-day symposium was open to the general public, and over 200 people participated. The participants included approximately 60 faculty and staff members of the two universities, including their presidents.

The symposium was opened with addresses by Prof. Manuel Tunon de Lara, president of the University of Bordeaux, Dr. Nagahiro Minato, president of Kyoto University, Mr. Jules Irrmann, consul general of France in Kyoto, and Prof. Antoine Petit, president of CNRS (French National Center for Scientific Research). The opening speeches were followed by a signing ceremony for an annex to the Strategic Partnership Agreement.

After overviews of the symposium delivered by Prof. Masayoshi Shigeta of Kyoto University’s Center for African Area Studies, keynote lectures were delivered by Ms. Junko Masuda, director general of the Africa Department of the Japan International Cooperation Agency (JICA), and Mr. Jean Albergel, director of the Institute of Research for Development (IRD) in France. Following the speeches, two panel discussion sessions were held. Session 1 focused on current and future collaborative education initiatives by the two universities, and the current status and future prospects of government support in France and Japan. Session 2 focused on the promotion of trilateral education and research collaboration between Japan, France, and Africa.

Signing ceremony for the annex to the Strategic Partnership Agreement 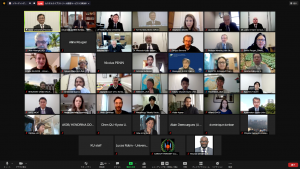 A screenshot of the symposium